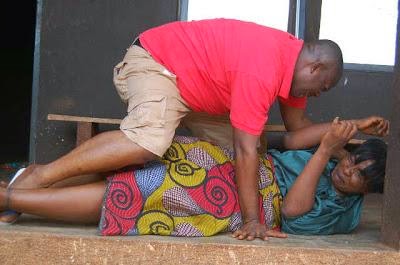 A middle-aged woman, Toyin Ayinde, has urged an Agege Customary Court in Lagos State to divorce her 20-year-old marriage. She is accusing her husband, Mudashiru, of being promiscuous. The wife, a businesswoman, said her husband sleeps with any woman that comes his way.
According to her: “When we got married, we didn’t have enough and we were contented with whatever we had but when we became comfortable, my husband began to womanize. He sleeps with anything. He lacks good taste.”She said her husband keeps claiming that there was no wealthy man who doesn’t womanize…

“To let you know how loose he is, five years ago, I was admitted to a hospital because our last child had jaundice after delivery. My husband, who is slack when it comes to women, had an affair with a nurse.

“I once woke him in the middle of the night to advise him. He cried and promised to stop the act. As I speak, there are no changes,” she said.

Toyin said her husband’s relations sent her out of his house because she refused to have sex with him.

“I refused to have sex with him because I could get infected if he continued to sleep around. Also, he wants to try all styles of sex with me which I strongly disagree.

“It’s been almost a year since I moved out of his house. His relations have been pleading with me to go back to him but they don’t know what I am facing. He is loose and I can’t cope anymore,” she added.

Responding, the husband Mr Mudashiru who did not deny the allegations said, “everything she said is true. I support our marriage dissolution,” he said.

But the court president advised the couple to reconsider their positions and adjourned till April 9.

Dominion of good over evil; the fate of the General

Prince Harry and flower of Ragland

Newszents is your news, entertainment, music fashion website. We provide you with the latest breaking news and videos straight from the entertainment industry.
Contact us: newszent1@gmail.com

President Obama wants 10,000 refugees from Syria while NY alone has...