The rapid pace of change and need for code in virtually every industry, including banking, has prompted major growth in alternative software development methods. “Low-code” and “no-code” are development approaches that are seeing strong traction amid tech talent shortage and booming demand from organizations pursuing digital transformation strategies.

Low-code refers to a software development approach where developers build applications in a graphical interface. Practically speaking, this means that instead of writing thousands of lines of code and syntax, developers simply need to drag and drop visual models to create applications.

The implications of this is that repetitive and tedious tasks, like dependency management, code validation, and complicated builds, can be removed through automation, allowing developers to focus instead on the creative extra mile that will differentiate their apps to those of competitors.

Not only that, but low-code is often perceived as the relevant solution to changing customer expectations. Rapid digital adoption over the past few years has put tremendous pressure on development teams to deliver ever more sophisticated apps in an increasingly shorter timelines, all the while maintaining, managing and evolving an existing app portfolio. Forrester estimates that low-code development platforms can make software development as much as ten times faster than traditional methods.

Low-code app development provides the capabilities for organizations to close this gap, allowing for increased agility, productivity and, in some cases, improved customer experience. Platforms like OutSystems, for example, offer capabilities necessary for delivering multiexperiences, allowing organizations to address all the ways customers engage digitally (e.g., touch, voice, and gesture).

Common features of a low-code app development platform include a visual integrated development environment (IDE), connectors to various back-ends or services like data structures, storage and retrieval, and an application lifecycle manager.

The rise of low-code

Low-code has risen in popularity over the past few years, attracting the interest of the business community for its ability to allow organizations to deliver sophisticated apps in a much shorter amount of time.

In mid-2021, more than a quarter of senior-level developers surveyed by Forrester reported that their organization developed apps using citizen developers and low-code platforms. By 2025, tech research and consulting firm Gartner estimates that 70% of new applications developed by enterprises will use low-code or no-code technologies.

These platforms’ growth has further been fueled by the ongoing tech talent shortage, which organizational consulting firm Korn Ferry estimates was standing at a deficit of 1.1 million in 2020. That number is projected to soar to 4.3 million workers by 2030. 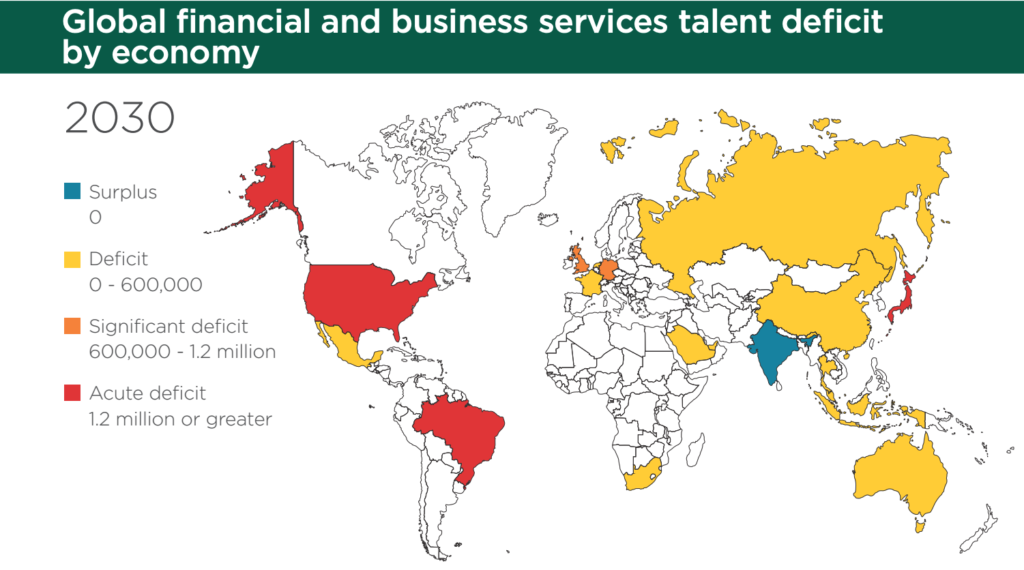 In Singapore, software developers and engineers are currently the most in-demand talents in the financial sector with more than 700 job opportunities currently available, according to Ravi Menon, managing director of the Monetary Authority of Singapore (MAS).

These drivers, coupled with increasing customer expectations and continuous technological advances, are set to push the low- and no-code development space upward. By 2030, US-based market research and consulting company Grand View Research expects the size of the global low-code development platform market to reach US$35.2 billion, registering a compound annual growth rate (CAGR) of 22.9% from 2022 to 2030.

In the banking and finance sector, FintechOS is a prominent low-code platform that allows banks, financial institutions and insurance providers to build, test and scale new digital products and services in weeks rather than months.

The startup, which is headquartered in London, closed a US$60 million Series B after seeing rapid adoption from financial institutions across Europe. It claims that more than 40 financial institutions now run on its technology, including Erste Bank, Societe Generale, Howden Group Holdings, and Vienna Insurance Group.

85% of FIs Are Wary About How to Combat Fraud

Should You Sell Before the Fed “Creates” a Crash?

BoE signals to lenders it is prepared to extend bond purchases

How to “Start from Zero” in Today’s Multifamily Market