Sono Motors, the company building an electric vehicle that’s partially powered by the sun, debuted its flagship Sion in New York City this week as part of a multi-city tour throughout the U.S.

The company aims to launch the $25,000 five-seater hatchback in Europe first — production is expected to start in the second half next year, with initial deliveries to customers in Germany, Austria and Switzerland before the year is out — but wanted to explore demand for the vehicle among Americans.

After a marketing event in Times Square, Sono brought its Sion to a lot in Greenpoint overlooking the East River and Manhattan’s skyline. It was a sunny day, a good omen for a car that runs off solar energy, and in a strange but happy twist of events, Whoopi Goldberg was there to check out the car, too.

Even though most of the final design of the Sion has been determined, the car Sono brought to Brooklyn was still a prototype, so there were still a few kinks to work out. The company told me there would be one last design iteration before it goes to series production next year. It’s not exactly a sexy-looking car, but it looks and feels capable, sturdy even, and the semi-finished product, which Sono markets as perfect for families and commuters, was impressive.

“This car would be great if you have a family,” Goldberg said to me. “You can put eight people in there and the dog!”

While eight people would certainly stretch the limits of what Sono is advertising, I could see what she meant. The hatchback, while small enough to drive around in an urban setting, is roomier on the inside than it looks.

A tall person would certainly have enough headroom and might have just enough legroom to be totally at ease. The trunk is also large enough to fit at least one TechCrunch reporter comfortably. Beneath the trunk is a hidden compartment for additional storage, although a spare tire wouldn’t go amiss should Sono decide to add that in.

The back seats go down flat — perfect to chuck a bed in the back in case someone really wanted to test the limits of a solar powered battery and go camping with the Sion.

“This can replace the mini van,” said Goldberg. “You can go shopping in it. You can feel comfortable parking it. And because it’s so inexpensive I think it makes it a lot easier for families. I have grandkids who can afford this. This is what I’d recommend for my family.”

The inexpensiveness of the car also explains why the interior is, if not Spartan, then simple. The seats are comfortable enough, but nothing plush and soft like you’d find in a luxury car. I didn’t see a cupholder in the backseat, only two in the front, which may put off American families, but there were little pockets on the backs of the driver and passenger seats.

The dashboard was also simple, with a 10-inch touch display screen which controls the infotainment system. The system has Apple CarPlay and Android Auto integrations, Bluetooth hands-free calling, climate control, and apps that display information about solar power, energy consumption and charging/discharging control.

The only notable flourish in the cabin was a line of decorative moss, placed behind some sort of plexiglass, just ’cause. 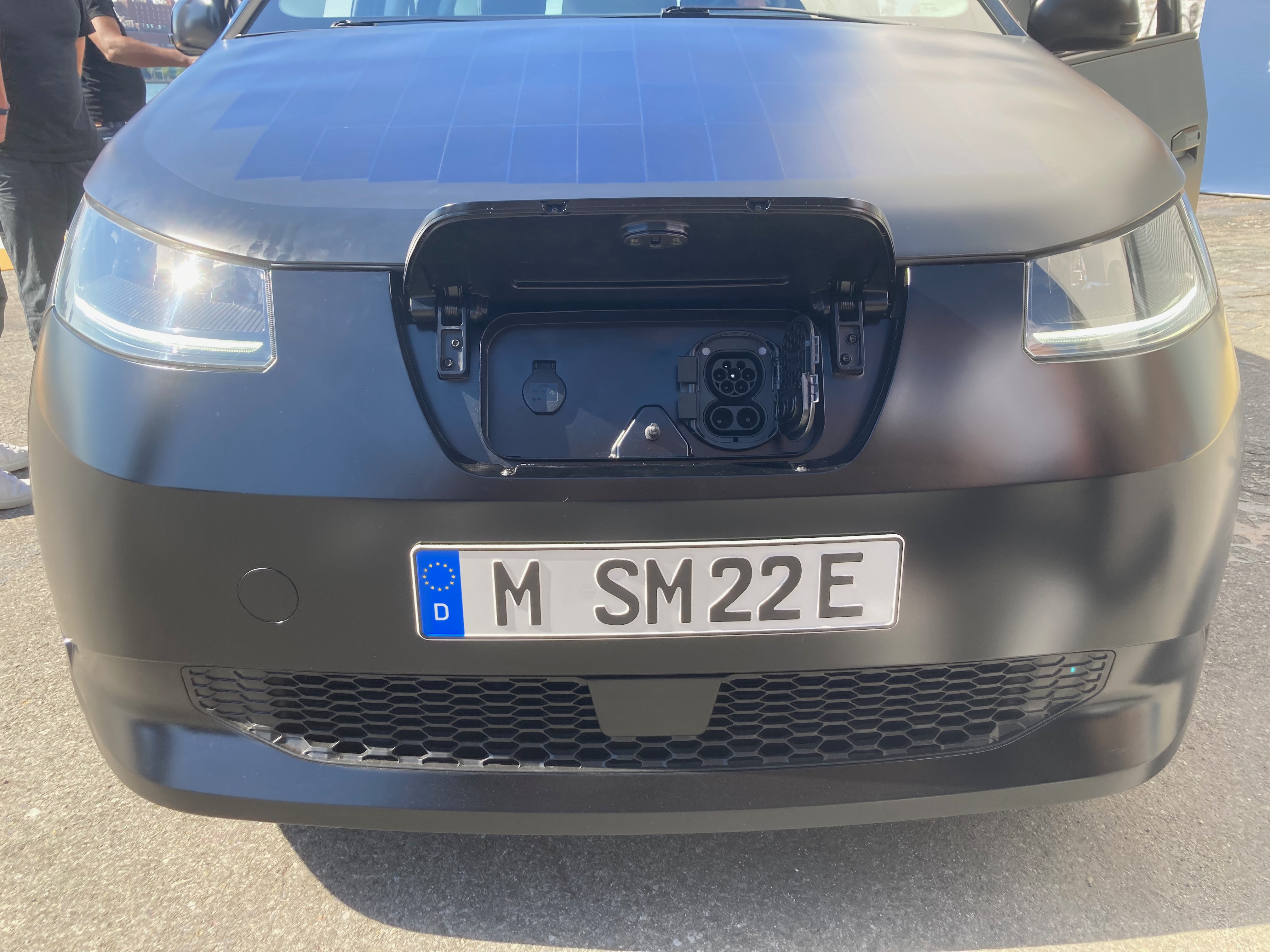 The Sion’s matte black outer shell consists of 456 integrated solar half-cells that collect energy from the sun and drip feed that energy into the battery. The car’s display features an image of the car that’s constantly updating to show how much solar power is being collected from the different panels and how that contributes to the total range.

The Sion’s 54 kWh lithium iron phosphate battery — made by BYD — offers a 190-mile battery range, with an additional 70 to 150 miles extra per week from the sun. This is made possible by the Sion’s proprietary motor control unit (MCU), which Christian Scheckenbach, Sono’s head of communications, told me is the brain of the solar system.

“We have low voltage coming from the solar panels, with seven circuits going to the MCU, and then you get high voltage into the DCU,” said Scheckenbach. “You can get a lot of energy yield this way compared to solar panels that are on a house. And it allows us to update in real time rather than every few minutes so we can see what is the max yield we can get out of the system. So it’s a mix of hardware engineering and software to create the overall solar system.”

The battery, which charges in the front of the car, has plugs for 75 kW DC and 11 kW AC chargers, as well as a plug that allows for bidirectional charging up to 11 kW. Sono says this allows the Sion to charge your e-bike, power your home, put energy back into the grid or even charge another EV.

I didn’t get to drive the vehicle myself, and we were only doing laps in an empty lot, but the drive seemed…smooth enough. It certainly seemed like it had a nice turn radius, which is always helpful when making sketchy U-turns on city streets. There was an unfortunate moment when the vehicle stopped entirely and starting making a sound not unlike the noise my freezer makes when it’s trying, and failing, to make ice.

“This is why this is a prototype and not a show car,” said Scheckenbach.

He also said the Sion is not designed to be an EV race car — Sono is capping the speed limit at 140 kph, or about 87 mph. So it can still go on the highway, but maybe couldn’t hold its own in the fast lane.

A direct to consumer car

The Sion will be sold as a direct-to-consumer car, which has its pros and cons. The pros are that doing D2C keeps overhead down, which allows for a cheaper vehicle, said Sono co-founder and CEO Laurin Hahn. However, this business model means it’s harder for prospective buyers to take a look at the vehicle before purchasing.

Harder, but not impossible. Sono does have a showroom in Munich and does regular tours throughout Europe to offer test rides, of which it has competed 18,000 so far, Scheckenbach told me.

When vehicles are finally ready for sale, Sono will offer delivery events and the option to pick up the car from a predetermined location.

In terms of maintenance and servicing, Sono is planning to partner with a third-party service network provider in Europe, the name of which will be revealed in the next couple of weeks.

To date, the Sion has received more than 20,000 active private reservations with an average down payment of about $2,000. Sono has also secured more than 22,000 preorders from fleet operators, including 12,000 from car subscription service Finn. Hahn told TechCrunch he expects other car rental companies that want more EVs in their lineup to also be fleet customers.

While Sono is starting production next year at its partner Valmet Automotive’s facility in Finland, the company expects to see a ramp beginning in 2025 in order to reach its goal of 257,000 Sions by 2030.

If Sono decides to launch in the U.S. in the next couple of years, it will be on the lookout for a regional production partner. The company might also consider producing a different type of vehicle, and has toyed with the idea of a crossover as well as a delivery van, Hahn said.

Free One-Year Subscription to Outside Magazine!