The 2018 reboot of long-running PlayStation action series God of War as a more contemplative, open-world adventure raised a few eyebrows at first, but the astonishing quality of the finished game put all doubts to rest. The sequel, God of War Ragnarok, is not the revelation the first was, but even “more of the same” is a welcome treat when “the same” is so very, very good.

Spoilers for God of War (2018) and the first couple hours of this game follow. If you haven’t played the first, stop now, take a sick day, and start playing!

The first game finished on an emotional high note and an intriguing cliffhanger as Kratos and son Atreus finally scatter the ashes of wife and mother Faye in Jotunheim and simultaneously learn that Atreus was known to the now-disappeared Giants as Loki.

Ragnarok picks up a couple years later, and Atreus has grown into his awkward phase (the game itself pokes fun at him) while Kratos remains the gruff and conflicted god-killer he always was. But a pair of unexpected divine visitors put the pair on the run to learn more about the machinations behind the imminent twilight of the gods.

It isn’t long before you’re off to the races, doing all the things you used to do — at some of the same locations, even. While Kratos has lost most of his gear and abilities (to the lament of their makers, the still charming dwarves Brok and Sindri), players will quickly find themselves in familiar combat and environmental puzzle-solving loops.

Ragnarok does not attempt in any way to reinvent the basics that made the original so compelling, though it certainly refines and expands them a bit. Though this combined with the reused (if altered) first areas may make the opening hours a bit monotonous to anyone who played through the previous game recently.

I’ve put in about 18 hours so far and, while I’m enjoying Ragnarok a great deal, I haven’t been as frequently surprised by either the scenery, combat or cutscenes the way I was in the first game. There have been amazing moments and awe-inspiring vistas, to be sure, but I wasn’t gawping at the screen the way I was when I first saw Jormungandr or Freya’s turtle-house. Of course fewer surprises are to be expected in a direct sequel, but the unfolding scope of God of War from its intimate beginnings and the diversity of the realms you visited was a big part of its charm.

The good news is things begin to differentiate once you leave the first handful of areas, so if you think of them more as a “getting up to speed” thing than as the first actual set pieces, you’ll have a better time. Ragnarok does have its own identity, but it takes a while to emerge.

In terms of story, themes and acting, it’s still extremely good, though there’s a sense of “what am I doing here exactly” that plagues me when I play, something that never really was the case before. Taking Faye’s ashes to the highest peak in the realms was a conveniently mobile goal post, but everything was still in service to it — as Kratos was frequently at pains to explain to Atreus, they didn’t even want to get involved in the affairs of the gods. 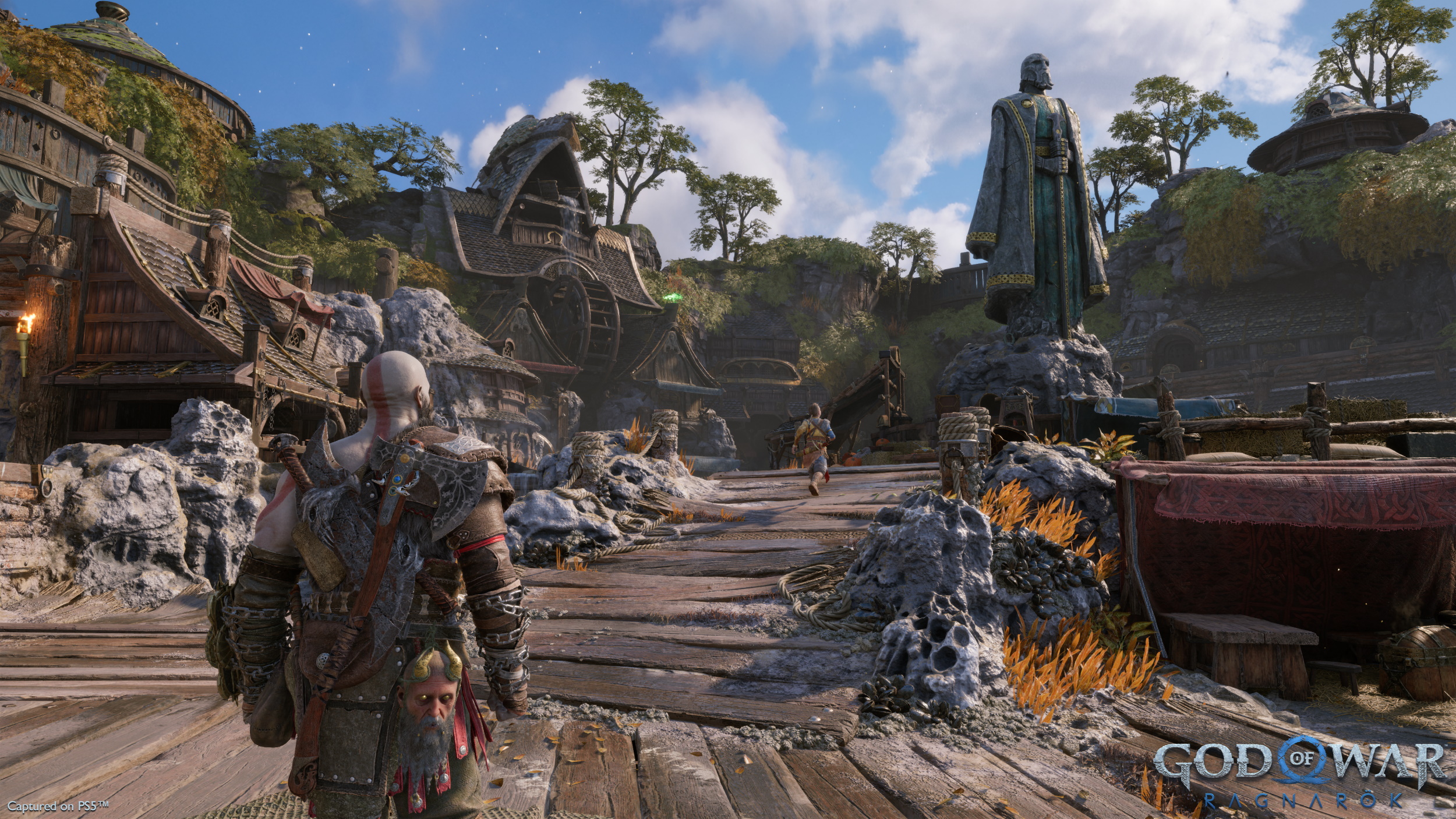 Now, as we juggle various new schemes and players, that simplicity is diluted. And perhaps more importantly, rote “open world game” features appear quickly and remain prominent throughout. I was enormously pleased with the quality of the side quests, but most of the random collectibles seem unremarkable, even to the characters. “Oh, another one,” they exclaim with little enthusiasm as Kratos picks up a crest, or book of poetry, or what have you.

There is also an annoying tendency, like that identified in Horizon: Forbidden West, of characters to offer needless advice in combat or puzzle situations. Just as you’re contemplating the layout of a room, Mimir will bark out, “Look, brother! Maybe you can use that to block the stream!” And in combat, “It’s vulnerable when it sparkles!” Thanks everyone, not necessary. Relax.

That said, I have really enjoyed some exchanges and sections quite as much as in the original, though the main and side stories aren’t nearly as cunningly intertwined. I haven’t finished it yet, though, so we’ll see how it pays off. I want to add however that I’m voluntarily not including details on a lot of characters and story developments that simply are better experienced yourself. The game hasn’t wrong-footed itself yet. The themes of loss, parenthood and protection that ran through the first have given way to those of compromise, communication and acceptance. As corny as that sounds, it works.

One area the game has already beat its predecessor on, however, is enemy variety. I’ve encountered many new critters and beings to fight, and importantly they tend to arrive in mixed packs — flyers from one side while melee guys attack from the other, and a third clings to the wall to rain down fire on you. It’s refreshing after the original’s heavy reliance on a handful of enemies, even if you end up taking most of these new beasties down pretty much the same way. Better than yet another troll. 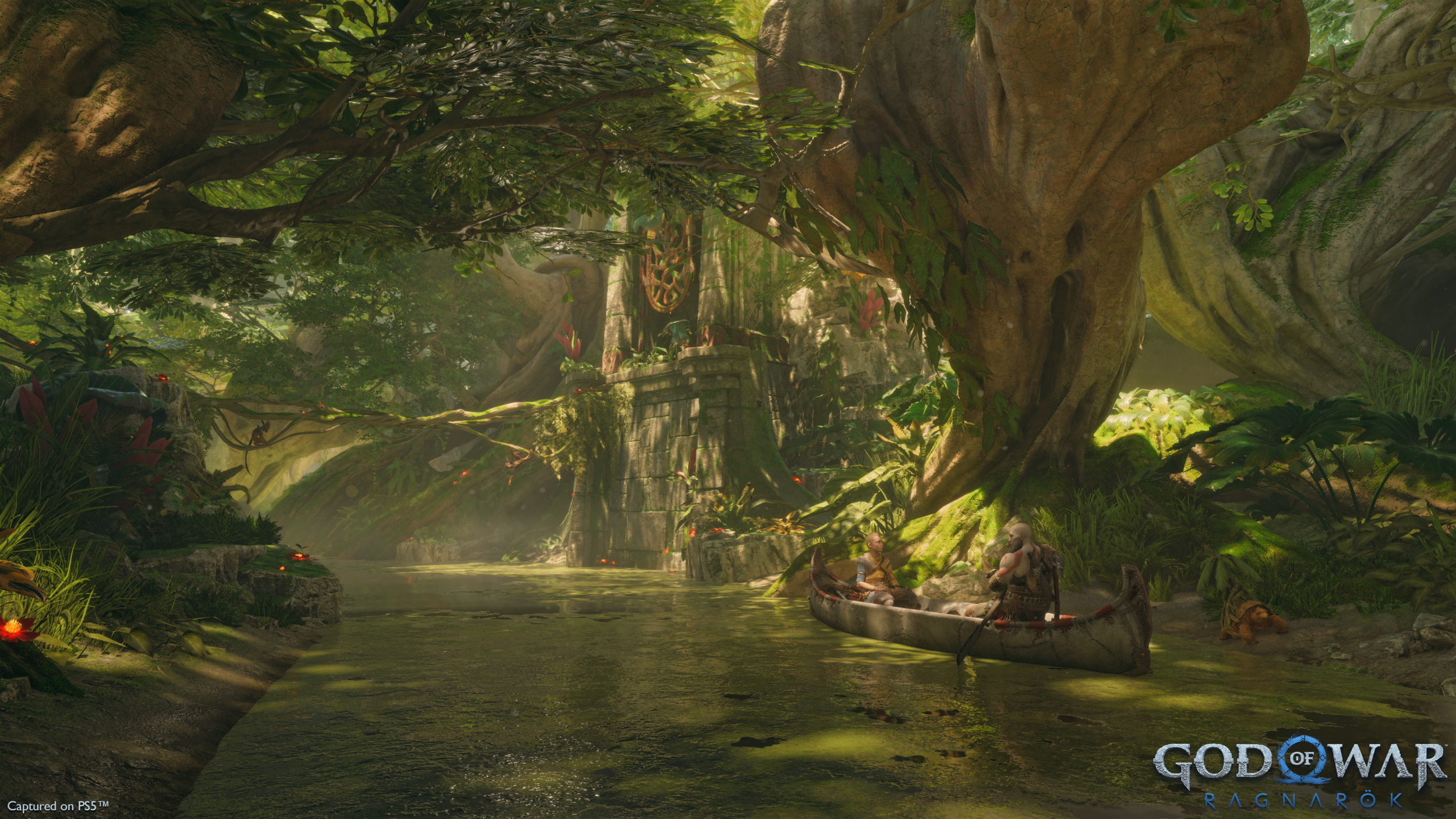 In terms of gameplay and systems, Ragnarok turns the dials up significantly and adds numerous layers of customization, some of which are more effective than others. It’s fairly easy to get lost in the menus or be unsure whether what you’re equipping will really affect your play much. But the slow drip of new gear and accessories does allow you a bit of breathing room — this is no Diablo or Nioh.

Without spoiling anything, I’ll add that there are more new systems than just customizing your Kratos, and these came as a pleasant surprise. Just when I was hoping for something different, it appeared, more or less as I hoped. Another reason to power through the first hours.

I’d also like to call out the accessibility options for being inclusive and helpful to anyone who needs them or wants them — I turned on one or two just to streamline things. They’re not quite as comprehensive as those found in The Last of Us or Ratchet & Clank, but it’s great to see a robust set of accommodations letting everyone experience a game like this.

God of War Ragnarok may not rise beyond the high water mark its predecessor set in 2018, but it doesn’t sink below it either. And what begins as more of the (excellent) same does diversify and address some of the first game’s few shortcomings. It’s extremely easy to recommend this gorgeous and imaginative game to any PlayStation owners (I played on PS5), and no doubt it will be among the highest-selling games this year as it makes its way into various holiday plans.

Bitcoin wants to break its bond with stocks By Reuters

Considering a career shift? Here’s how to approach it strategically

A reckoning is upon us. Here’s what to expect

Can the Left Succeed in Gaslighting America?